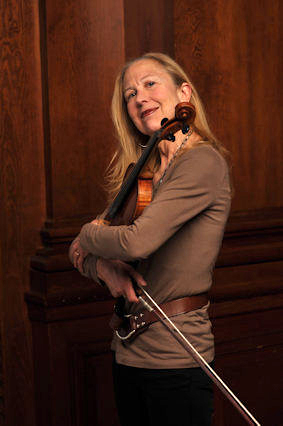 About Anhared Stowe
Founder, Artistic Director, and Violinist of the New World Trio, Anhared (Ann) Stowe has spent a lifetime in music as a chamber musician, teacher, Hartford Symphony Orchestra section leader, and a soloist. As a soloist and recitalist, Ms. Stowe has performed with orchestras up and down the east coast and midwest. She has recorded works on the Opus One Label, as well as non-classical music on other labels in the UK. More recently, Ms. Stowe was heard on NPR’s Morning Edition, accompanying the poet Edgar Silex with works of her own composition.

Ann started with the violin while she was in grade school and was made Concertmistress of the Florida All-State Orchestra as a sophomore. That year, she also became a member of what is now the Sarasota Symphony Orchestra and soloed with SSO. While she initially toyed with the idea of scientific research as her future occupation, it soon became apparent that Ann was going to pursue classical music as a profession, and she relocated to New York City to continue her studies at the Juilliard School. Despite her recognized talent, her rather austere Pennsylvania Dutch Brethren family looked upon the idea of her going to New York in preparation for a life as a professional musician with deep misgivings. “I had to struggle more than a bit to get them to accept the idea.” While at Juilliard, Ann worked with members of the Juilliard String Quartet and, after graduating, continued to pursue her passion for chamber music, working with groups such as the Hungarian and Guarneri String Quartets, and the Albeneri Trio. Following stints in the Sioux City and Sioux Falls Symphonies as concertmaster, and the Omaha and Des Moines Symphonies in the first violin section, Ann came to Hartford to continue studying violin with Charles Treger, and received her Master of Music Degree from The Hartt School soon after joining the Hartford Symphony Orchestra. At Hartt, she was concertmistress of the orchestra and honored with an assistantship to be part of the Graduate String Quartet and Trio.
Ann joined the Hartford Symphony Orchestra in 1971, a period when the symphony was transitioning from its community orchestra roots into a dedicated, fully professional ensemble under Arthur Winograd. Times were different then. “In some ways, Arthur was an old-school taskmaster,” recalls Ann, “and I suppose I should have been flattered when he told me that I ‘played like a man.’” Ms. Stowe began her career with HSO in the first violin section, and became Principal Second Violin in 1979, performing solos in that capacity. Ann became the first HSO musician to be honored with an endowed chair. She remained with the orchestra for forty-six years, retiring in 2017.

During her time as Artistic Director for New World, Ann has built the ensemble into a substantial presence in New England, with the group having been in-residence at The Bushnell Center for the Performing Arts and the Hartt School. The trio has been in existence for 35 years: “Hartford’s one reliable source of chamber music.”, says the Hartford Courant. Under her tenure, New World Trio also became known for its innovative combination of recognized repertoire and engaging modern compositions. While at Hartt, for example, NWT premiered pieces by the Hartt composition faculty, including composers Stephen Gryc, David Macbride, Robert Carl, Larry Allen Smith, and Alexander Lepak, as well as holding annual competitions for student composers to premier their works. Over the years New World has commissioned fifteen composers and performed well over one hundred 20th and 21st century works. At the Bushnell, two separate music series were supported there in addition to other performances throughout the region as part of the New England Touring Roster. Recognition of her efforts to bring the best of modern composition have been recognized by several organizations:
“…[New World Trio] has been an exemplar…it has been musically courageous,” says Chamber Music America. Ann’s thoughtful programming, and thematic combinations produced well-received, musically compelling programs; as a result, significant foundation and institutional support for NWT followed, and by the close of her tenure there, New World had become Connecticut’s premier home-grown chamber music ensemble with support from the Roberts Foundation, Greater Hartford Arts Council, the Long Foundation, Ensworth Foundation, and Helen M. Saunders Foundation. Critical acclaim followed as well: “… the three musicians of the New World combined together as one sound, potent and delectable”. -Hartford Courant review. With the group well established, Anhared took a hiatus from the trio, concentrating on projects such as her collaborations with noted pianist (and multiple competition winner) Larry Graham. Ms. Stowe was subsequently asked by NWT’s board to resume her role as Artistic Director, and she has been again guiding the trio for the past six years.

Throughout her performing career, Ann has also been a passionate advocate of personal music instruction, and she has taught students for more than four decades. She feels strongly that taking part in a young person’s growth and development provides a lasting sense of reward and relationship, noting that all fine musicians have been the product of close, personal teaching. “I have had the privilege of instructing entire families and am currently giving lessons to a young man who is the son of a former student.” Ann has also served as adjunct faculty for a number of the area’s preparatory schools. Many of Ann’s students have been accepted into the Regional [as concertmaster] and All-State Orchestras, the Connecticut Youth Symphony, and have gone on to win scholarships for schools of higher education.

Ann lives in Hartford’s West End, where she also volunteer-tutored students in reading at Noah Webster and Betances Schools for two decades. Now a grandmother, Ann is currently focused on her two young granddaughters. She says laughingly, “These days, they are tutoring me!” 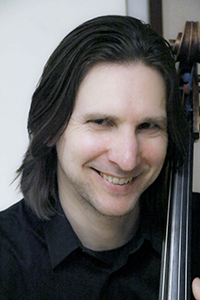 Cellist Peter Zay’s musical achievements have taken him to concert halls throughout the United States, Europe, and Central America. He appears regularly on the Sunday Serenades Concert Series at the Wadsworth Athenaeum in Hartford, CT., and has traveled frequently to Spain to perform as a guest of the Quartetto Saravasti. As a member of the American Sinfonietta, he has toured to many of Europe’s leading venues, including Vienna’s Musikverein, Frankfurt’s Alte Oper, and Stuttgart’s Beethoven Saal. He has performed at the International Musical Arts Institute chamber music concerts in Fryeburg, Maine, the Yellow Barn Chamber Music Festival (VT), the Taos Chamber Music Festival, the Aspen Music Festival, and the Bellingham (WA) and Wintergreen (VA) Festivals of Music. He has been featured live on WFCR and WAMC Public Radio and has been heard on radio broadcasts across the United States and Europe.

In addition to being a member of the Hartford Symphony Orchestra, Peter is principal cellist of the Plymouth Philharmonic. He has performed with the Boston Lyric Opera, the Pro Arte Chamber Orchestra of Boston, the Boston Modern Orchestra, the New World Symphony, the Barrington Stage Company and the New Haven, Springfield (MA) and Portland (ME) Symphonies. As a backing musician, he has toured with Diana Krall, Linda Ronstadt, Pepe Romero and Andrea Bocelli, and he has appeared with Luciano Pavarotti, Barry Manilow, Peter Gabriel, Arlo Guthrie, Frankie Valli, the Beach Boys, Aretha Franklin, and many others.

As a member of the Mosaic String Trio, Peter has collaborated to create and perform many varied and engaging educational programs to thousands of school children throughout Connecticut. He is also a member of the New Bedford (MA) Symphony’s SchoolsMusic! Trio, which has performed hundreds of concerts for children in the south coast area of Massachusetts, and he is a featured soloist in the NBSO Symphony Tails program. 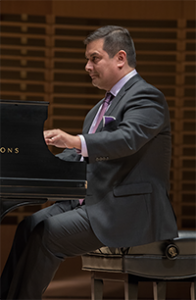 About David Ballena
A native of Peru, DAVID BALLENA is in demand for his versatility as a soloist, chamber musician and coach. Dr. Ballena has performed throughout the US and South America, including concerts at some of the nation’s most prestigious venues; the Benedict Music Tent and Harris Concert Hall as part of the Aspen Music Festival’s Summer Concert Series in Colorado, Weill Recital Hall at Carnegie Hall, the Terrace Theater at the Kennedy Center for the Performing Arts, and the National Gallery of Art in Washington, DC. In addition, he has appeared on the Lunch Time Classics live radio broadcast from the studios of WUOL in Louisville, KY. Dr. Ballena has served on the faculty of the Bel Cantanti Summer Opera Festival at the Catholic University of America and is a staff pianist at the Aspen Music Festival and School. He currently teaches at Eastern Connecticut State University. Dr. Ballena received his early training at the Conservatorio Nacional de Música in Lima, Peru. In 1997, he moved to the U.S. to study with Lee Luvisi at the University of Louisville where he earned his B.M. in Piano Performance. He received his M.M. and D.M.A in Collaborative Piano from the University of Maryland where he studied with Rita Sloan. Further studies were with Emilio del Rosario, Victor Derevianko, Anton Nel and Joseph Kalichstein. 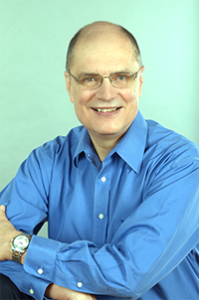 About Stephen Gryc:
Farmington-based composer Stephen Michael Gryc has always been fascinated by sounds and musical instruments. An intimate understanding of the technique of orchestral instruments and the imaginative use of instrumental color are hallmarks of his music. Gryc is Professor Emeritus of Music Composition and Theory at the Hartt School of the University of Hartford where he taught full-time for thirty-five years. His instrumental expertise has brought him commissions from some of the world's leading soloists including principal brass players of the New York Philharmonic and Hartford Symphony concertmaster Leonid Sigal.

Gryc has written for every type of western instrument and ensemble from duo to large orchestra. His works for flute and trumpet have served as contest pieces for several international performance competitions. His works have been performed by a diverse group of ensembles such as the New Jersey Percussion Ensemble, American Brass Quintet, Avalon String Quartet, Cascadian Chorale, United States Marine Band, and Minnesota Orchestra. His music has been heard in 46 states, 33 foreign countries and over 200 colleges and universities worldwide.

Sweet Prospect is the fourth work by Stephen Gryc to be premiered by the various incarnations of the New World Ensemble over the years. Dances and Nocturnes for violin, viola, cello, and piano was commissioned by the New World Ensemble and was premiered by the group in 1990. The New World’s recording of the piece is available on a compact disc of Gryc’s chamber music titled Dreams and Nocturnes (Centaur Records CRC 2595). A piece for oboe and string quartet, Fantasy Variations on a Theme of Bela Bartok, was premiered by the New World Ensemble in 1993. The group then recorded the work with famed oboe soloist Bert Lucarelli for a compact disc titled Stephen Gryc: New Music for Flute and Oboe (Opus 1 Recordings CD 166). Gryc’s Dream Vegetables: Six Poems of Maggie Anderson for reciting voice, clarinet, violin, and marimba was premiered in 1997. Both Anhared Stowe and Peter Zay performed with the Hartford Symphony Orchestra under conductor Edward Cumming for the premieres of Gryc’s trombone concerto, Passaggi, in 2006 and violin concerto, Harmonia Mundi, in 2011.